Dispari-trees between Community Districts in NYC

When I tell people I’m going to the ‘Big Apple’ or ‘the City That Never Sleeps’, no one thinks ‘Oh, what a great place to see some nature.’ Heck, even I didn’t think that! NYC is not known to many as a metropolis of biodiversity, even though the city has a decent amount of vegetation. This is understandable since there is a greater appreciation and knowledge of many of the landmarks like Times Square or the Empire State Building. Compared to the smaller suburban and somewhat rural places I’ve lived, NYC is no comparison. Unless you’re headed to Central Park, ‘natural’ is not a commonly used adjective to describe NYC.

Similarly, for The Nature Conservancy (TNC); not many people yet associate them with urban conservation work. The TNC NYC Program, though relatively new compared to the rest of the organization, has partaken in many great conservation and engagement projects across the city and state such as the restoring and studying oysters through the Billion Oyster Project, restoring native species to enhance the ecological diversity and resilience of the Jamaica Bay Wildlife Refuge and mapping green roofs in NYC — just a few of many initiatives that have greatly improved the extent of environmental conservation.

21% of total land area in NYC is trees and there are many efforts and initiatives that aim to conserve and/or enhance tree canopy. Trees are valuable assets because they help improve water and air quality, help lower air temperatures and alleviate the effects of urban heat islands, provide wildlife habitat, and enhance property values by up to $10,000 [1] I had the privilege of working with TNC’s New York City Program, where I mapped tree canopy and tree canopy loss scenarios across the city to help understand potential policy solutions. My focus was on trees on one to two home residences because although 41% of existing tree canopy in NYC is found in parks and recreational areas, 26% of tree canopy in NYC resides on residential lands with 1-2 family buildings [1]. Even though there are a lot of trees on residential land, I discovered that there are few policies or regulations protecting them from as-of-right development of new homes or the expansion of existing homes.

Another aspect of my project was the relationship between tree loss with socioeconomic and demographic variables. I found that community districts that had high percentages of poverty, unemployment and reports of crime, as well as higher populations of Black and Hispanic communities, had higher percentages of tree canopy by their homes. This was a surprise to me, because being NYC, I would think that having trees was a luxury for those whose districts could afford to allocate money towards greening their neighborhoods. But what did not surprise me was that these community districts were also more vulnerable to losing more of their tree canopy due to lack of regulations in those areas.

Regulations specifically for private residential lots did not always explicitly say ‘protect trees’. There were regulations around ‘required open space’ or ‘required yard space’ [2], so for the purposes of my analysis, I assumed that those provisions included trees to some extent. As the need for more residential buildings increases due to the increasing population in NYC, unprotected green spaces in communities of color will be the first to go. So, it makes sense that areas with higher rates of poverty and unemployment are also more vulnerable to loss of resources.

There are already so many obstacles that are preventing vulnerable or underserved communities from achieving their potential, and I don’t believe that lack of tree canopy or green space should be added to that list. Regulations conserving trees on public land exist and have helped improve green infrastructure of predominantly white community districts in NYC. If the same could be done for private land, NYC could improve life for many of its residents. 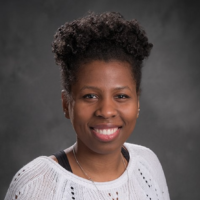 Gloria Desanker is a graduate student at Michigan State University where she is finishing her Master’s degree. She received her Bachelor’s in Environmental Science at the University of Virginia. Her research for her thesis looks at phenological patterns in East Africa using GIS and satellite imagery. Once finished with her graduate degree, Gloria hopes to pursue a career with an environmental conservation non-profit using GIS to look at ecological phenomena and environmental justice issues.